On a particularly cold day in the fall of 1918, Gustav Von Mink was valiantly trying to get the last of his crops in before the doctor rode from the next village to help Mrs. Von Mink with the delivery of their second child. As darkness fell, representatives of the Czar’s elite security forces galloped onto the property with news that was both good and bad.

“You have three days to pack up and go”, a weary Gustav was told. An official proclamation was handed to him by the regiment commander, telling of the expropriation of the Mink family farm. “And don’t dawdle. Your neighbors only got one day”.

And so they fled, Gustav and Mrs. Mink and their eldest, Joe and their newborn Philip, swathed in flannel and oblivious to the ensuing turmoil. Landing weeks later in Canada with only the clothes on their backs and a few heirlooms from the dowry in a tattered carpetbag, the family settled in Edmonton. The hard working and industrious new immigrant found work in, and room and board above, a small chocolate factory run by a childless widower originally from the same village in the old country.

Life was hard, and adjusting to a new country was frustrating, but the family was resolute. In the years leading up to the Great Depression, Gustav worked diligently at his apprenticeship, and before long, it became his passion, and his growing reputation as a master chocolatier preceded him. Along the way he fathered a girl Marcia, and two more sons, Louie and Hymie. The prosperity that came after WWII enabled Gustav to contemplate retirement. Fortune shone on him with the announcement one day by Philip, upon returning from his studies at the Royal Conservatory of Music, that he would enter the family business. The allure of chocolate proved greater than the inherent fame of singing opera.

Philip took his chocolate show on the road. From Bogotá to Belgium, London to New York, feted by sheiks, politicians and B-list Hollywood starlets, Philip enjoyed a certain notoriety in the industry, in part due to his conviction that anything was possible, and to his being decades ahead of his time. Others say it was the mustache.

Now run by third generation Minks, the company is working hard to spread Mink love through our Cafes, or here online. 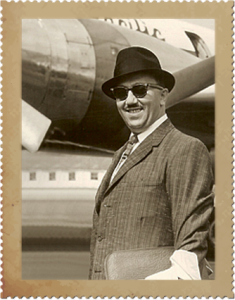